This is an introduction of recent BERT families.

Relevant notes of mine (CYK):

Given a text sequence , autoregressive (AR) language modeling factorizes the likelihood along a uni direction according to the product rule, either forward:

The AR pretraining maximizes the likehood under the forward AR factorization:

where denotes the context representation by NNs, such as RNNs/Transformers; denotes the embedding of $x$.

It is not effective to model the deep bidirectional contexts.

Autoencoding (AE) based pretraining does not perform density estimation, but recover the original data from corrupted (masked) input.

However, it relies on corrupting the input with masks. The drawbacks:

XLNet[1] (CMU & Google brain 2019) leverages both the advatage of AR and AE LM objectives and hinder their drawbacks.

For a sequence $\pmb{x}$ of length $T$, there are $T!$ different orders to perform a valid AR factorization.

Permutation language modeling not only retains the benefits of AR models but also capture the bidirectional contexts as BERT. It only permutes the factorization order, rather than the sequence order.

The next-token distribution with the standard softmax formulation:

where , abbr. , denotes content representation, which encodes both context and itself, as hidden states in Transformer, i.e. standard self-attention, see below figure(a). 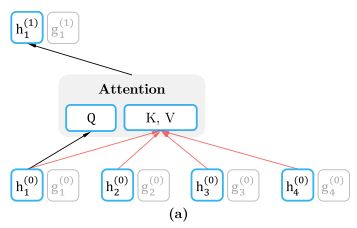 where , abbr. denotes a query representation, only using the position and not the context , as below figure(b). 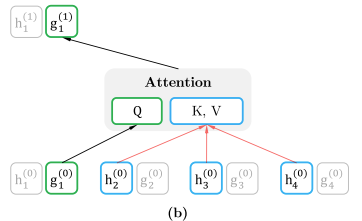 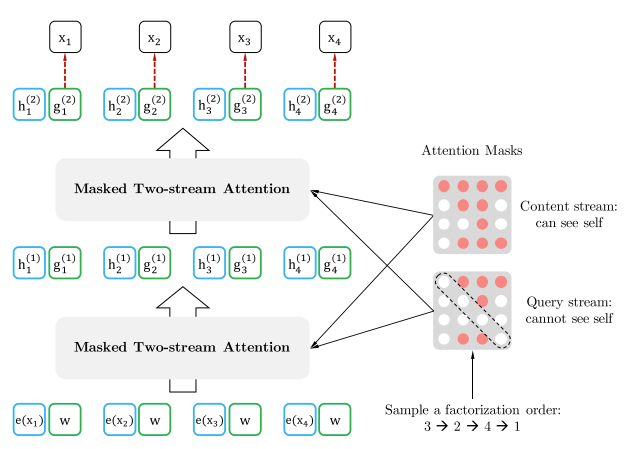 Borrow relative positional encoding and segment recurrence mechanism from Transformer-XL[2].
The next segment with memory is:

XLnet only considers ‘’whether the two positions in segments are within the same segment as opposed to considering which specific segments they are from‘’.

The idea of relative encodings is only modeling the relationships between positions , denoting the segment encoding beween position i to j.
The attention weight , where is the query vector in std attention and $\mathbf{b}$ is a learnable head-specific bias vector. Finally add to the normal attention weight.

The advantage of relative segment encodings:

At each iteration, the span’s length is samplled from a geometric distribution $\mathscr{l} \sim Geo(p) = (1-p)^{(k-1)} p$; the starting point of spans are uniformly random selected from the sequence. (In SpanBERT, p=0.2, and clip .)

Given a masked span , where (s,e) denotes the start and ending positions. Each token in the span are represented using the encodings of the outside boundary tokens and (i.e., and in the figure) and the target positional embedding of target token , that is:

where $f(\cdot)$ indicates the 2-layer FFNN with layer normalizations and Gelu activations.

The representions of span tokens is used to predict and compute the corss entropy loss like MLM objective in BERT.

ALBERT decomposed the embedding parameters with higher dimension to smaller matricees, by firstly projecting the inputs into a lower dimensional embedding of size E, followed by the second projection to the hidden space. The embedding paprameters are reduced from $O(V \times H)$ to $O(V \times E + E \times H)$, which is obvious when $H \gg E$

All parameters across layers on both self-attentions and FFNs are shared. It is empirically showed that the L2 distance and cosine similarity between the input and output are oscillating rather than converging, which is different than that in Deep Equilibrium Model (DEQ)[10].

ALBERT use two consecutive setences as positive samples as in NSP, and swap the order of the same ajacent segments directly as the negative samples, consistently showing a better results for multi-sentence encoding tasks.

ELECTRA trains two NNs, a generator $G$ and a discriminator $D$. Each one primarily consists of an encoder that maps a sequence on input tokens into the contextual representation .

The loss functions are:

The combined loss is minimized:

where $\chi$ denotes the corpus.

After pretraining, throw away the generator and fine-tune the discriminator on downstream tasks.