Auto-regressive language modeling can be distangled as the accumulated product of conditional probabilites of the next word:

where is the initial contextual sequences, $T$ is the generated variable sequence length.

Conventional decoding strategies aim to maximize the likelihood of generated sequences. In this way, generated texts with the highest score for long passages are often generic, repetitive, and awkward.

It assumes that models assign a higher probability to higher quality text.[5]

Greedy search selectes the token with the highest probability at each step:

So short-sighted is the greedy 1-best search not to guarantee the optimal sequences with the highest probabilities.

As a heuristic graph search algorithm, beam search explores the decoding search space with a beam-first search in a greedy left-to-right manner, retaining only the best $B$ partial hypotheses and pruning the hypothesizes with low probabilities at each time step, where $B$ is the beam width.

Length bias
It is noticeable that such a strategy prefers shorter sentences since the accumulated multiplication of probabilities reduces the overall probability of the whole sentence.

Beam search with a larger beam size posses the length bias towards outputs with the shorter length.

Lack of diversity / degenerate repetition
The outputs of beam search on image captioning are near-duplicates with similar shared paths and minor variations[1]. Most completions tend to stem from a single, highly valued beam.

Near-identical beams
Generated sentences with top-$B$ beams are computationally wasteful due to the slight variation and near-identity with the same repeated computations.

Loss-evaluation mismatch
Loss-evaluation mismatch is that improvements in posterior-probabilities not necessarily corresponding to task-specific metrics. Tuning the beam size as a hyperparameter leads to reduced beam widths, resulting in the side effect of decoding mostly bland, generic, and ‘safe’ outputs.[1]

As shown in the figure, it shows a discrepancy between human- and model- generated word probabilities: repetition of text decoded by beam search w.r.t the probability of tokens generation, while that of human generated text is with variance.[5] 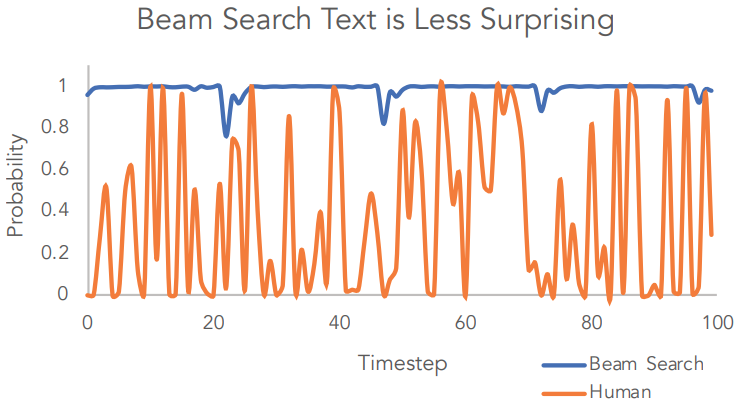 Q: Is the repetition truly due to the beam search?

Diverse Beam Search[1] divides the beam budget $B$ into $G$ groups and greedily optimize each group using beam search while holding previous groups fixed, with each group consisting of $B^{\prime} = B / G$ budgets.

An extra loss term is supplemented, where $\delta(\cdot, \cdot)$ is the measure of sequence dissimilarity, such as negative cost of co-occurring n-grams between two sentences. It is proved that Hamming distance achieves the best as the measurement.[1]

Noisy Parallel Appeoximate Decoding (NPAD)[16] injects randomly sampled standard gaussian noise to the hidden state of the decoder at each step $t$. The Gaussian variance anneals from a starting $\sigma_0$ to $0$ as the decoding progresses. They applied linear annealing with .

Clustered Beam Search[18] is applied for chatbots. It initially selects $B \times 2$ candidates according to the log probabilities. Afterward, K-means is used to cluster all candidates into $K$ clusters, keeping $B/K$ candidates in each cluster for the next step, wherein average word embeddings are adopted for clustering.

Sampling strategies rely on the randomness of predicted word probabilities.

The unreliable tail that over-represented the relatively low-probability takes the blame for the degenerate sampling results.[5]

Temperature Sampling[6] shapes the probability distribution via a temperature $T$ on logits $u$ to regulate the entropyu of the distribution:

Setting $t \in (0,1)$ warps the distribution towards high probability events, lowering the mass in the tail. Choosing a temperature higher than one leads to the output more random whilst making it less than one is similar to greedy sampling.[15]

Given the top $p$ vocabulary as the subset:

Let . The original distribution is rescaled as: