Name Entity Recognition (NER) labels sequences of words in a text which are the names of things, such as person and company names, or gene and protein names.

HMM is a generative model that optimises the likelihood $P(W|T)$, consisting of three components:

The joint distribution is:

We estimate the posterior by combining the likelihood and the prior P(T).

HMM states only conditions on the previous state.

HMM assumes the independence between observations $z$, while MEMM does not. However, MEMM suffers from the label bias problem.

MEMM is a discriminative model. It computes the posterior $P(Z=T|X=W)$ directly. MEMM states conditioned on the previous state and current observation.

where $f{\cdot}$ is real-valued feature functions, $Z$ is a normalization term.

CRFs were designed to overcome this weakness.

To estimate the individual probability of a transition from a state $q’$ to a state $q$ producing an observation $o$, build a MaxEnt model:

Modeling the distribution of a set of ouputs $y_{1:T}$ given an input vector $\mathbf{x}$.

where $\lambda$ are the free parameters of the potentials, common form:

Given a set of input-output sequence pairs, . We can learn the parameters $\lambda$ by Maximum Likelihood. Under the i.i.d. data assumption, the log likelihood is:

Intuition:
Capture both information from history (forward LSTM) and future (backward LSTM) using bi-LSTM; Also use sentence level tag information (after concatenation of both forward and backward LSTM/GRU hidden states in each time step) followed by the CRF model; Each output after concatenation can be regarded as a sentence level output.[2] CRF can help learn the boundary constraints, for example, ‘B-‘ is the start of a tag.

Cons: RNNs are not as GPU-efficient as CNNs in terms of training speed and efficiency.

Let $y$ be the tag sequence and $x$ an input word sequence. Then, we have

In BiLSTM-CRFs, two potentials: emission and transition. The emission potential for the word $i$ comes from the hidden state of the BiLSTM at timestep $i$. The transition scores are stored at $\mathbf{P} \in \mathbb{R}^{|T| \times |T|}$. In the following implementation[8], $\mathbf{P}_{y_i, y_i-1}$ is the score of transitioning to tag $i-1$ from tag $i-1$. 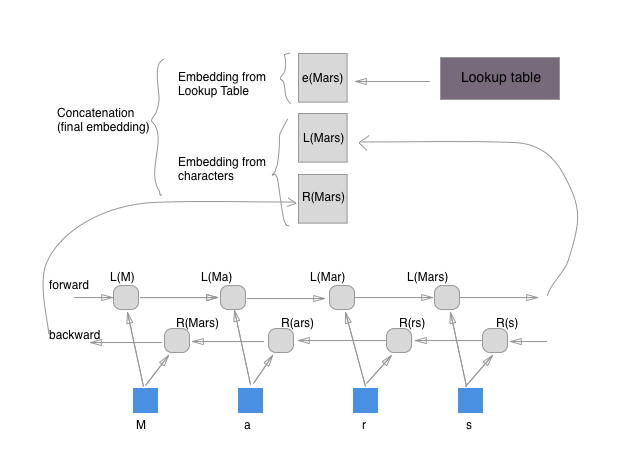 And add a final dilation-1 layer to the stack:

Finally, apply the simple affine transformation $W_0$ to the final representation for each token :

In comparison with BiLSTM-CRF

Bi-LSTM or ID-CNNs calculates the logits for each token, whilst CRF layer capture the transmission probability of sequential inputs, i.e. use NNs to predict each token’s label independently, or apply Viterbi inference in a chain structured graphical model.

Bidirectional Transformer for Language model, with pretraining methods of Masked Language Models (predicting randomly masked 15% tokens of each sentence) and next sentence prediction (to capture information of ajacent sentences).[5] 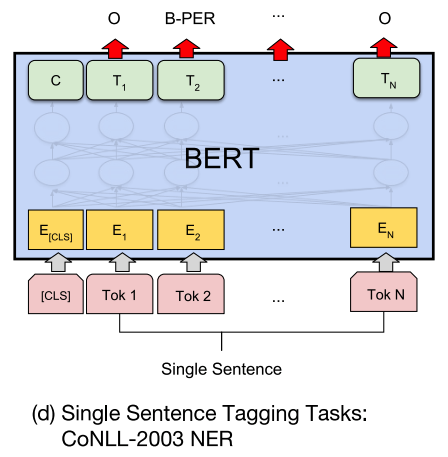 , where $\mathbf{e^s}$ signals the segmentation label on the char $c_j$ given by a word segmentor with BMES scheme. 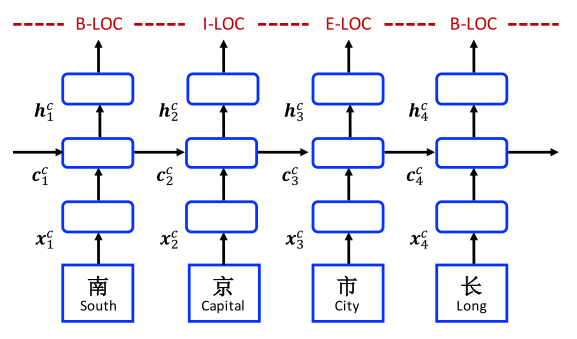 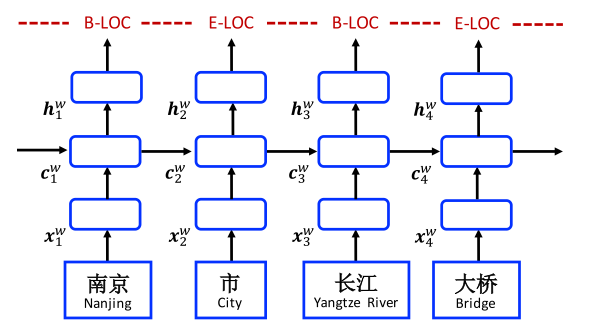 1.Word + char bi-LSTMs: bi-LSTMs with chars as input in each time step.

3.Word + char-CNNs
Use char sequence of each word to obtain its char representation $\mathbf{x}_i^c$:

In comparison with char-based model:

The computation of cell vector considers lexicon subsequence in the sentence[4].

The word cell represents the recurrent state of from the beginning of the sentence. The is:

where , are input and forget gates. There is no output gate for word cells since labelling is performed only at the char level.

Then cell vector is:

where the gate value , are normalised to and by setting the sum to 1: 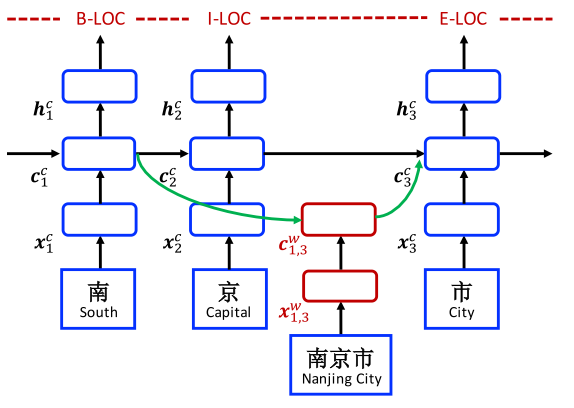 On top of , , …, , where $\tau$ is $n$ for char-based and lattice-based models and $m$ for word-based models. The probability of a label sequence is:

where $\lambda$ is the $L_2$ regularisation parameter and $\Theta$ represents the parameter set.