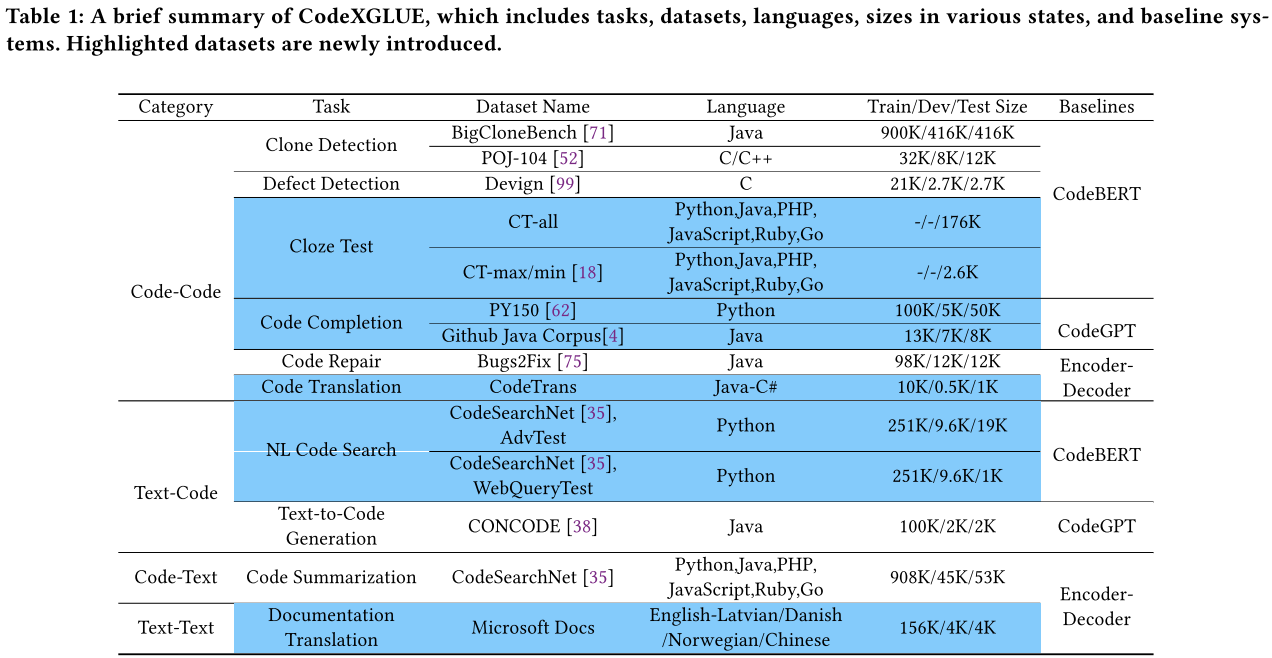 Background: There is no attempt yet to obtain the high-quality contextual embeddings of source code, and evaluate it on multiple program-understanding tasks simultaneously. That is the gap that CuBERT aims to mitigate.

It shows that CuBERT can use only 33% labeled data with only 2 epoch to match the baselines trained with full data and many more epochs.

Background: the success of PLMs drive the surge of multi-modal pre-training, which are learned from bi-modality.

CodeBERT[2] is a bimodal PLM for natural language (NL) and programming language (PL).
It is the first large NL-PL PLM for multiple PLs. 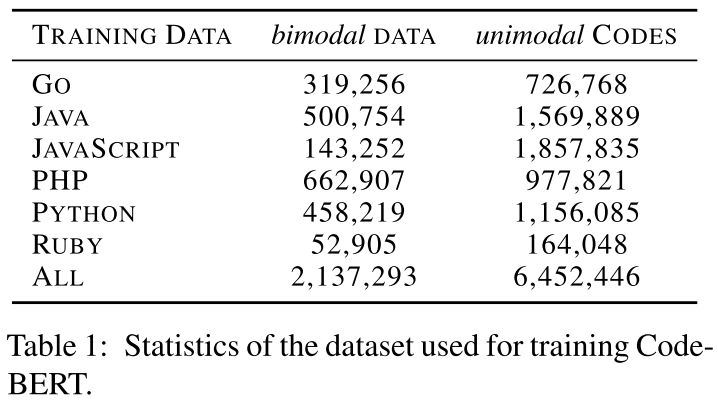 CodeGPT[5] is a variant of GPT-2 (L12/A12/H768). [5] trained both from scratch with newly obtained vocabularies and from GPT-2 initialization with original vocabularies (termed CodeGPT-adapted). 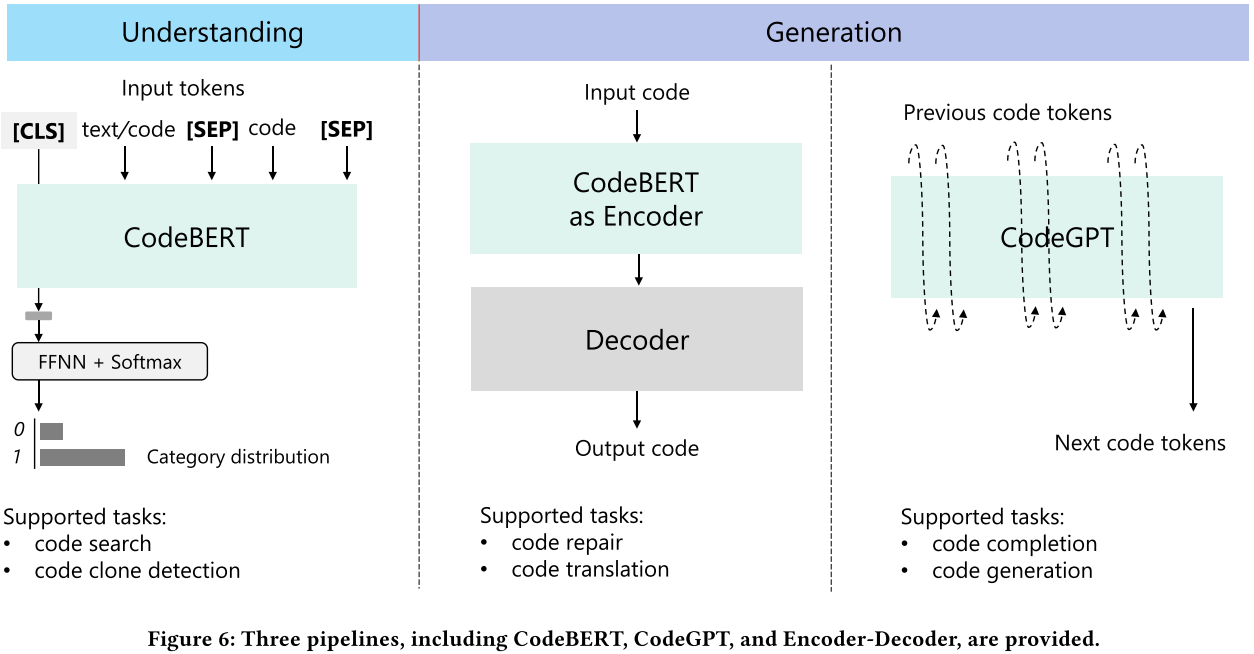 GPT-C [4] (i.e., IntelliCode Compose), a variant of GPT-2, can generate syntactically correct code in multiple PLs, capable of completing an entire line of code in a couple of key strokes. It is able to learn to infer types of PL identifiers and long-range code semantics without inputs extracted by means of a static analyzer explicitly passed to the model as features. 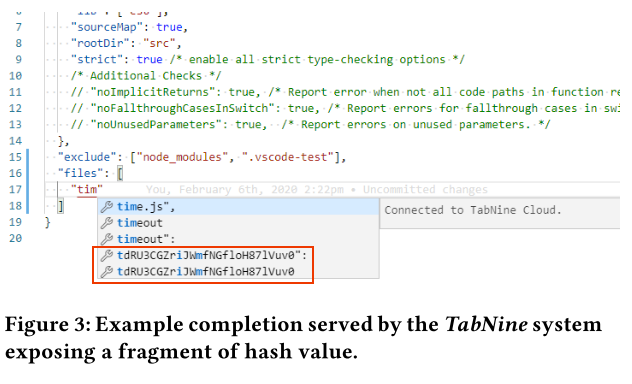 To address this problem, the training should be shielded from inadvertently gaining access to secrets or personally identifiable data. For this reason, [4] identifies and normalizes numeric literals, string literals and comments, including docstrings, to <NUM_LIT>, <STR_LIT>, and <COMMENT> special tokens, respectively.

For user experience, if a response time under 100ms is necessary to avoid any feeling of delay or lag. To achieve it in a cloud-based model deployment setting, [4] presents caching on the client side. When typing a non-alphanumeric character, suggestions are queried from the server. Those suggestions, each as a list of tokens along with their scores, are stored in a trie placed in the cache. This allows to prune the tree efficiently at a character-level as the user continues typing. [4] simply traverse this tree greedily by always branching to the node with the highest score.

To preserve accuracy, [4] terminates the completion-tree traversal if none of the child nodes has a score that is equal to or larger than the score of its parent multiplied by a ratio $R$, defined as:

where $L$ is the position of the root node of the trie, $\alpha$ is the relaxation factor, and $\kappa$ is the curvature factor. $\alpha$ is used to adjust the values of $R$ for very small or very large values of $L$. A lower value of $\alpha$ would relax the policy producing longer completion suggestions, while a value closer to 1.0 would tighten the policy producing shorter suggestions. $\kappa$ controls the rate of increase of the $R$: A smaller $\kappa$ would give a steeper curve for smaller values of $L$, producing shorter suggestions, while a larger value of $\kappa$ would yield a flatter curve resulting in longer completion suggestion. [4] selects $\alpha=0.8$ and $\kappa=10$ to gain a balance between suggestion length and relevance. 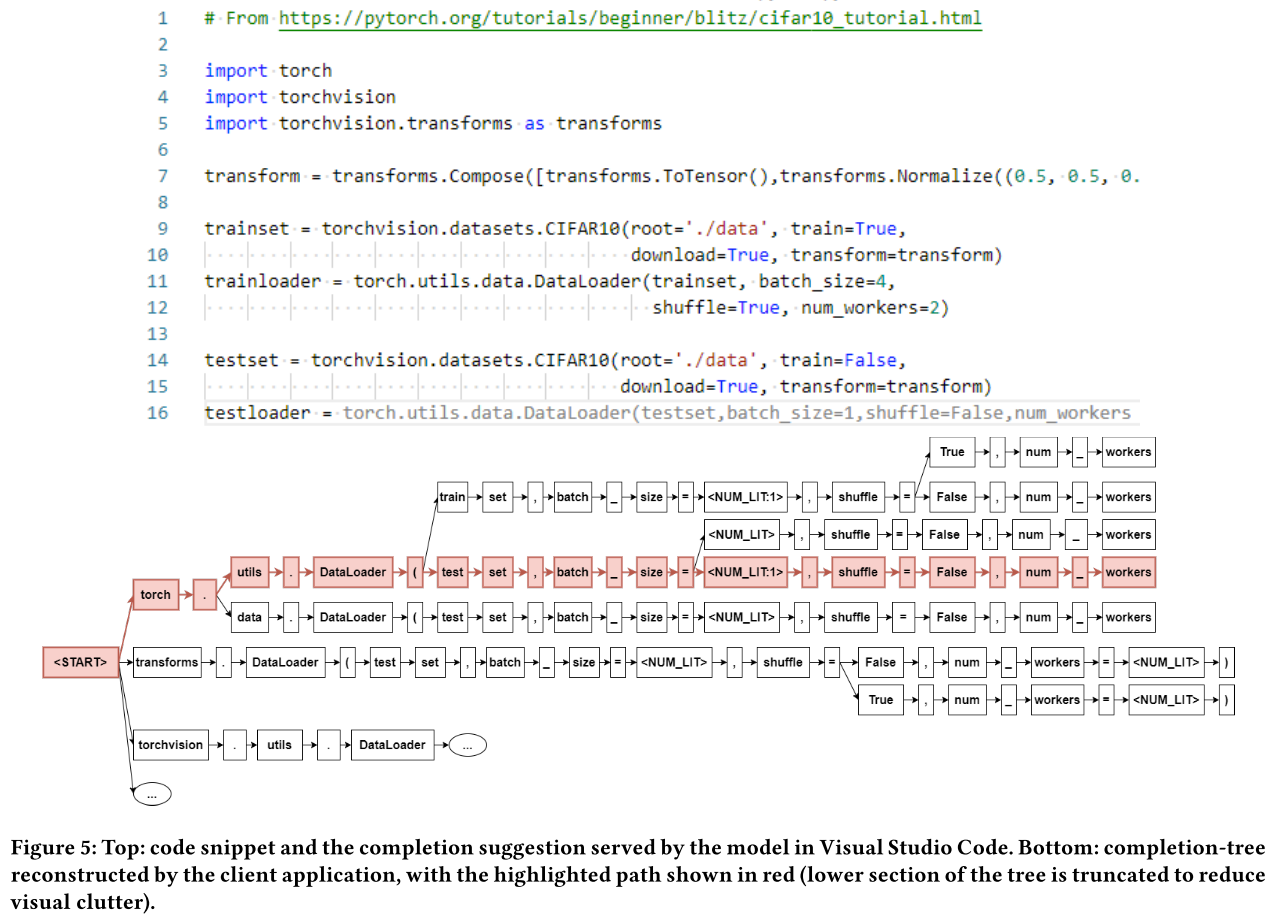 GraphCodeBERT[6] incorporates the code structure of data flow into pre-training. Data flow is a graph that represents dependency relation between variables, in which nodes represent variables and edges represent where the value of each variable comes from.

Given a source code, [4] firstly parses the code into an abstract syntax tree (AST) which includes syntax structure of code. The terminal nodes (leaves) are used to identify the variable sequence $V$. We take each variable as a node of graph and a direct edge $\epsilon = \langle v_i, v_j \rangle$ from $v_i$ to $v_j$ refers the value of $j$-th variable comes form $i$-th variable. The set of directed edges as $E = { \epsilon_1, \epsilon_2, \cdots, \epsilon_l }$ and graph $\mathcal{G}(C) = (V, E)$ is data flow that represents dependency relation between variables in the source code.

The graph-guided masked attention matrix $M$ is as follows: 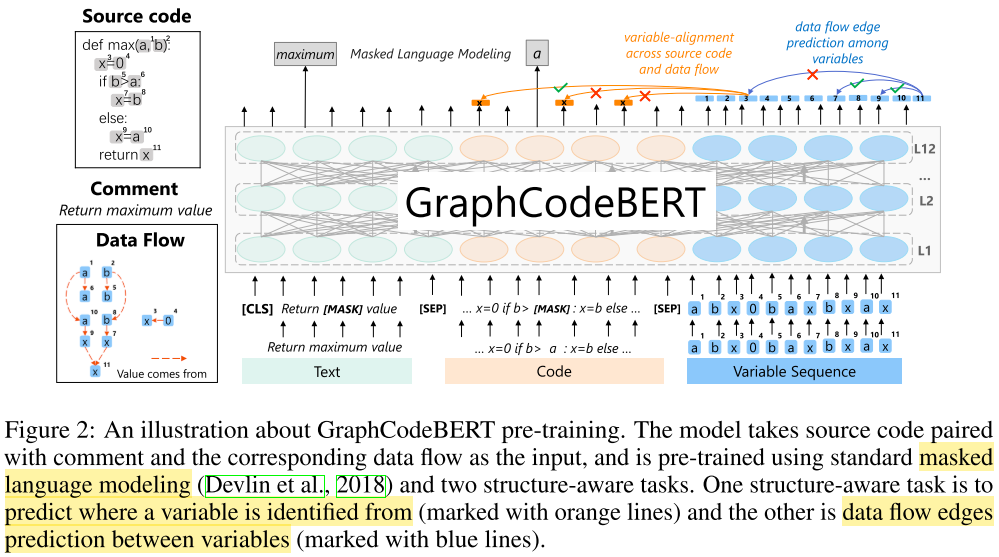 The table reports the Mean Reciprocal Rank (MRR) on the CodeSearchNet.

TransCoder[11] uses a transformer encoder-decoder model to perform monolingual PL translation, in which the encoder is initialized as XLM, and the decoder is randomly initialized.

[11] instantiates the pre-training with following settings of unsupervised transcompilation:

Deobfuscation (DOBF) [10] proposes a new objective based on the deobfuscation of identifier names in source code. It leverages the particular structure of PLs. Although it does not require any parallel copora of source code aligned to NL, DOBF outperform GraphCodeBERT, CodeBERT and MLM pre-training on multiple downstream tasks.

DOBF obfuscates code snippets by replacing class, function and variable names with special tokens, and train a model to recover the original names. When an identifier is selected, all of tis instances in the code are replaced by the same special token. This differs from MLM when the name of a variable can appear multiple times while being masked a single time. As a result, the feaction of meaningful tokens masked by the objective is language independent: for more verbose languages (e.g., Java), the less informative syntax-related tokens will not be masked out by the DOBF objective. 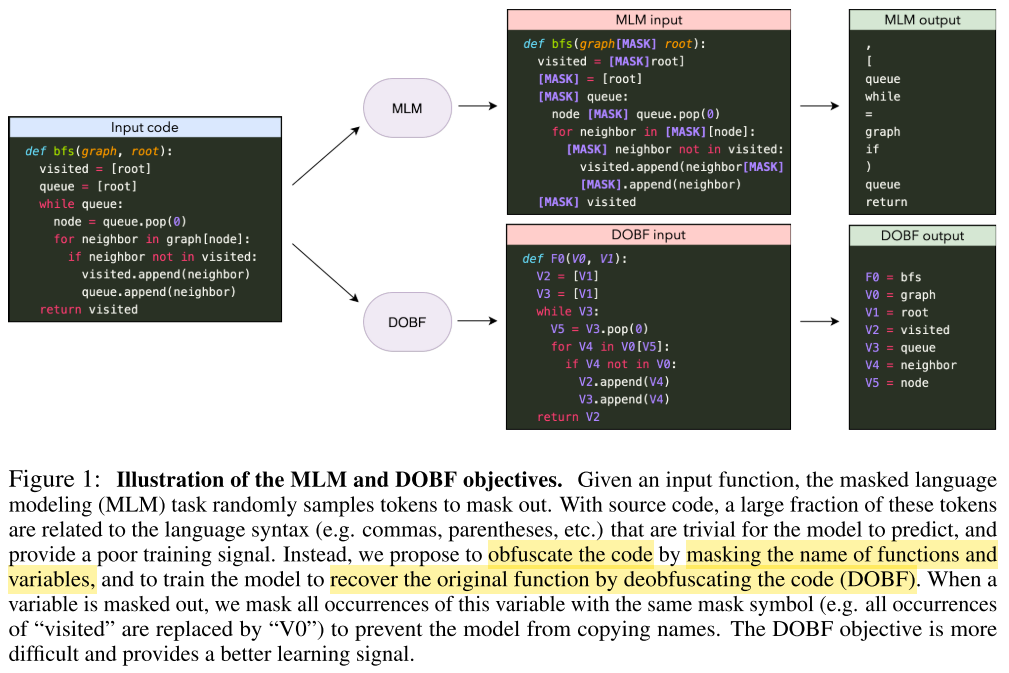 PLBART (Program and Language BART)[7] is a bidirectional and autoregressive transformer pre-trained on unlabeled data across PL and NL to learn multilingual representations applicable to a broad spectrum of program and language understanding and generation applications.

One key challenge to aggregate data from differnt modalities is that some modalities may have more data, such as we have 14 times more data in PL than NL. Thus, it mixes and up/down samples the data following XLM-R[9] to alleviate the bias towards PL. It samples instances for pre-training according to multinomial distribution with probabilities ($q_1, q_2, \cdots, q_N$):

It shows that PLBART learns better generic program semantics. It achieves the highest improvement in Ruby, however, PLBART is not pre-trained on Ruby.

CodeT5[8] is a unified encoder-decoder model, which considers the token type information in the source code. It proposes an identifier-aware pre-training objective. 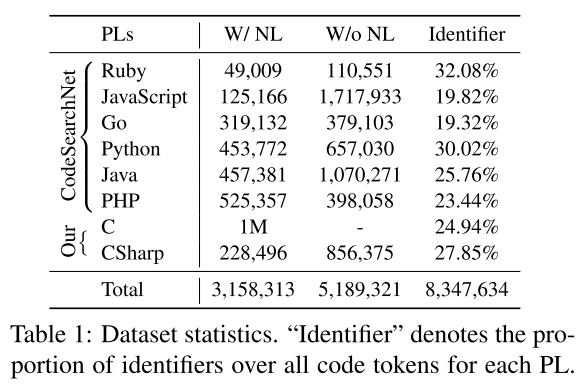 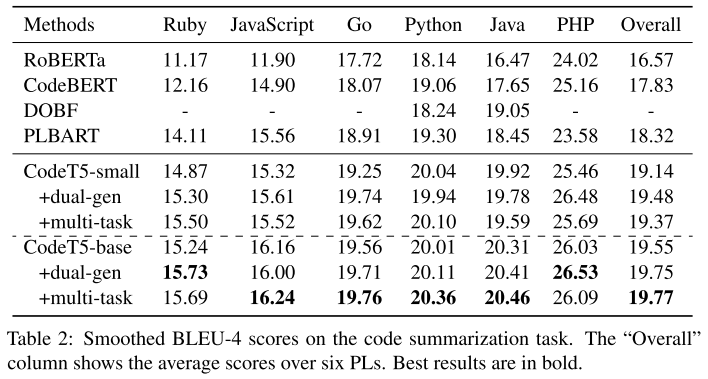 It is observed that removing MSP can largely reduce the generation task performance but instead increase the defect detection performance, indicating that MSP can capture syntactic information for generation tasks.

Removing MIP would hurt the defect detection task the most, indicating that it might focus more on code semantic understanding. 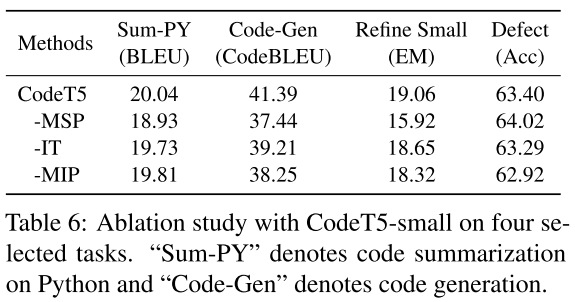 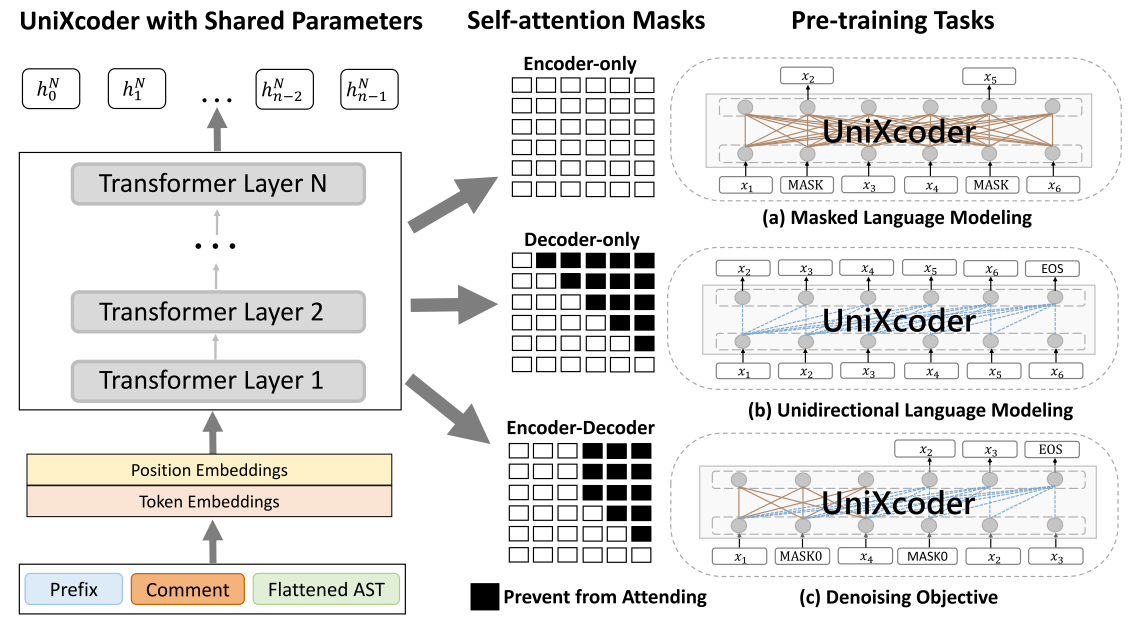 InCoder[13], a unified generative model that can perform program synthesis (via left-to-right generation) as well as editing (via infilling), is the first large generative code model (6.7B) that is able to infill arbitrary regions.

It learns to infill by randomly replacing spans of code with a sentinel token and moving them to the end of the sequence. The model is trained to predict all tokens in the complete sequence in this permuted ordering. During inference, it can edit code by replacing spans with sentinel tokens, prompting the model with the new sequence, and having it generate new tokens to replace the masked spans. 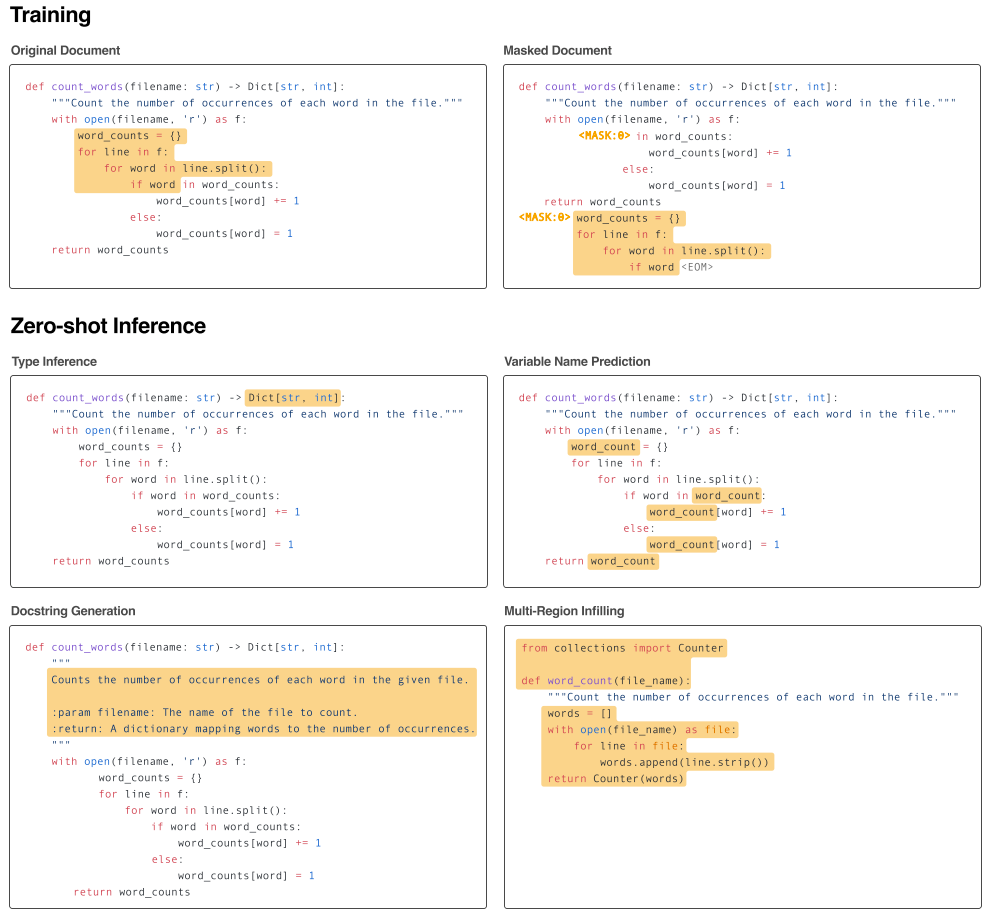 It samples the number of spans from a Poisson distribution with a mean of one, truncated to the support [1, 256], so that there are typically a small number of spans. The length of each span is sampled unifromly from the length of the document and the set of sampled spans is rejected and resampled if any spans overlap.

Once spans are sampled, each span $k$ is replaced with a special masked sentinel token <MASK:k>. The sequence of tokens in the span is then moved to the end of document. Let “Left” be the left context, and “Right” be the right context, “Span” be the sampled span between left and right contexts, then it maximizes the log probability of the masked document: log P([Left; <MASK:0> Right; <MASK:0> Span; <EOM>]).

[13] computes the probability of the sequence auto-regressively and train the model using cross-entropy loss on all tokens except the mask sentinel tokens <MASK:k>, so that the model does not generate these tokens during inference. 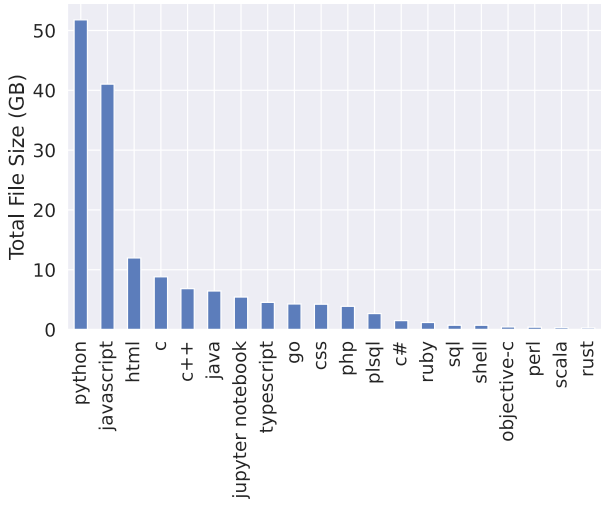 Sources:
(1) Code files and repo metadata from GitHub and GitLab via public APIs. ~670M public non-fork repos, including all code from a list of 28 PLs (determined by file extention).
(2) include all other Python and Jupyter files obtainable through the GitHub archive on BigQUery that cannot already obtain from GitHub directly.
(3) All text and code (with markdown formatiing removed from text cells) in Jupyter notebooks.

It trains a new BBPE, allowing tokens to extend across whitespace (excluding newline characters) so that common code idioms (e.g., import numpy as np) are single tokens in the vocabulary. It reduces the total number of tokens required to encode the training corpus by 45% relative to the BBPE tokenizer and vocabulary of GPT-2.

Codex[15], a finetuned variant of GPT-3 created by OpenAI, has powered the GitHub Copilot and exceled at a variety of codeing tasks.

After filtering, it has 159GB.

The numpy script for the unbiased estimate of pass@k. 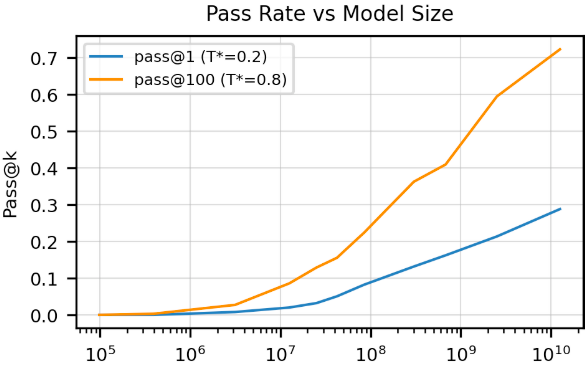 AlphaCode[16] is an encoder-decoder transformer model developed by DeepMind, achieving on average top 54.3% with more than 5,000 human participants on Codeforces. 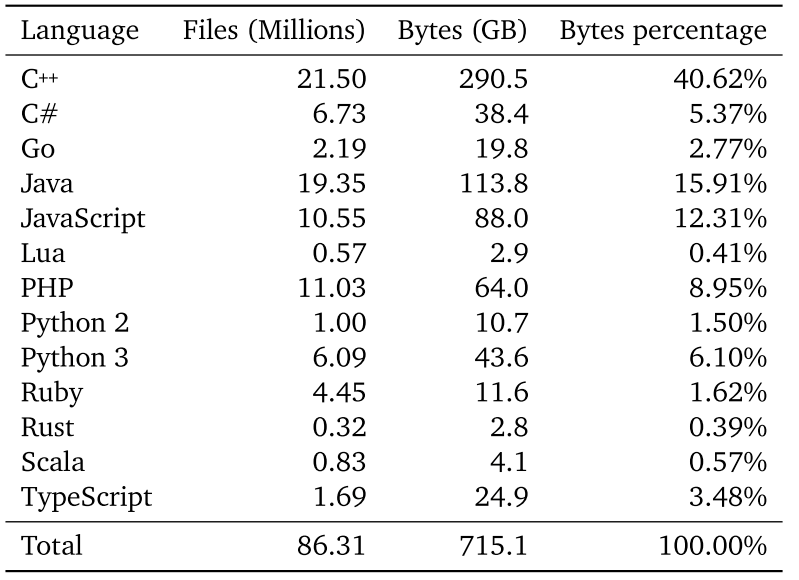 PolyCoder[17] is a 2.7B code language model trained on 12 different PLs, achieving the new SOTA in C langauge.

CodeGen[14] is a 16.1B causal language model pre-trained on code created by Salesforce, outperforming OpenAI Codex on HumanEval.

PaLM-Coder[18] is a fine-tuned 540B PaLM with decoder-only setup, training on GitHub repositories.