The table summarizes the difference between various tokenization approaches.

It can be seen from the table that:

Byte-Pair Encoding (BPE)[8] firstly adopts a pre-tokenizer to split the text sequence into words, then curates a base vocabulary consisting of all character symbol sets in the training data for frequency-based merge. 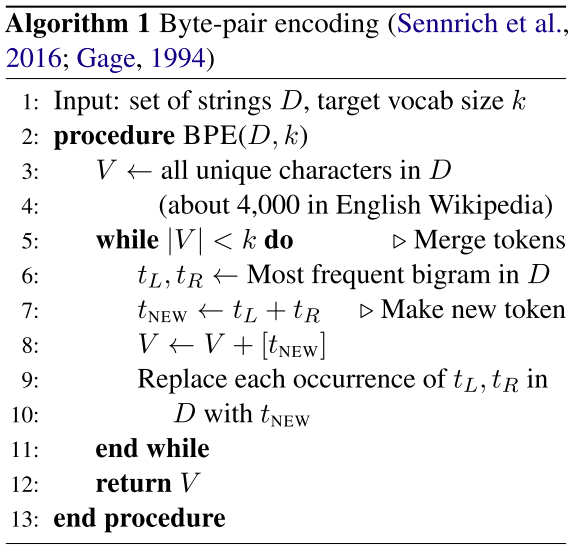 Unicode code point contains 130k+ points to cover the full space of textual characters, which can increase the base vocabulary size of BPE. Thus, Applying BPE to the byte sequence of language is a great idea proposed in GPT-2[14] to reduce the vocabulary size. However, directly applying byte-level BPE can result in suboptimum because the greedy frequency-based heuristic in BPE tend to merge common words into neighbors to generate overfit sub-tokens, such as “-ing.”, “-ing!”, “-ing?”.

To avoid this, GPT-2[14] prevents BPE from merging across different character categories for any byte sequence except space. With byte-level subwords, BBPE can represent any texts using moderate vocabulary size without out-of-vocabulary problem. Moreover, it will increase the byte sequence length to x4 maximum. 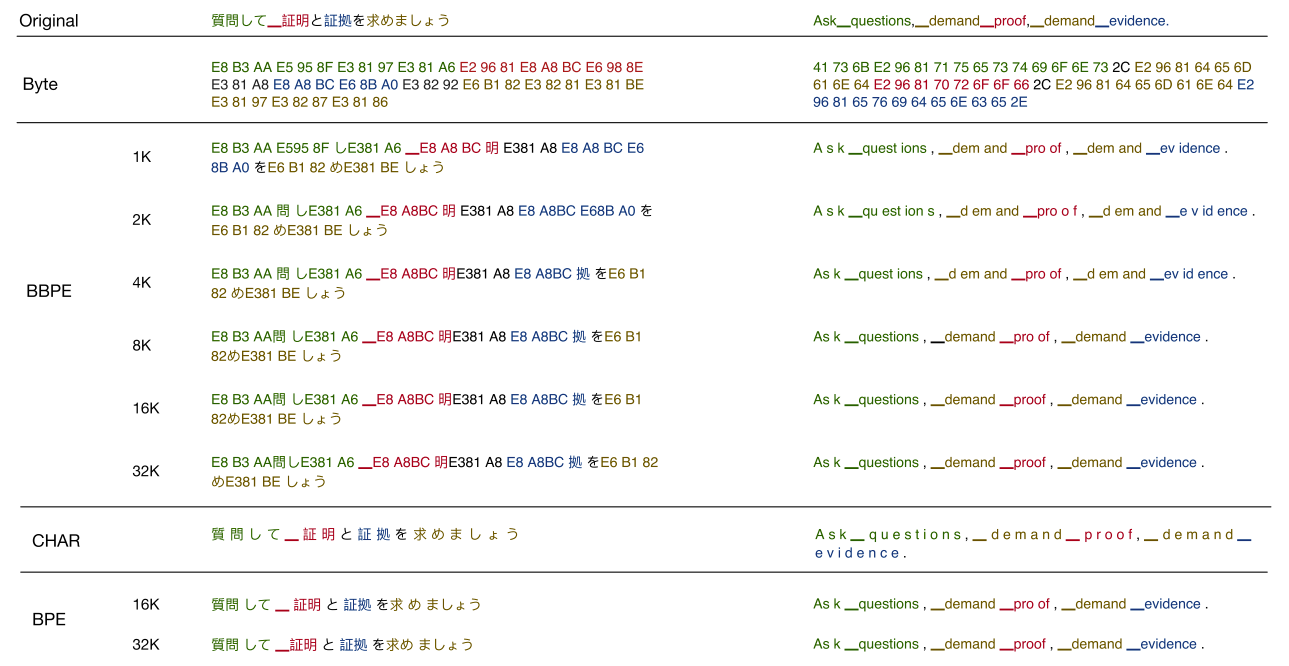 The implementation of GPT-2 & RoBERTa.

WordPiece[9][10] can be viewed as a language-modeling based BPE variant. It trains with similar process to the BPE but uses disparate merge rule: WordPiece select the unit pair that maximizes the likelihood of traing data at utmost, rather than choose the most frequent pair. WordPiece chooses the subword pair that has the maximum mutual information value.

WordPiece scores the likelihood of possible pairs using an n-gram LM. [9] mentioned that training LMs for every possible merge is prohibit, they used aggressive heuristics to reduce the budget. However, the public training implementation is unavailable.

The BERT tokenization applies two tokenizers one after another:

Unigram Language Model[11] initializes its base vocabulary with a large # of vocabulary and gradually removes a portion (e.g., 20%) of units according to the likelihood change. It use a unigram LM to evaluate the likelihood increase after subword removal, where the probability of each unit is computed using EM algorithm. The drop process will stop until reach the pre-defined vocabulary size. 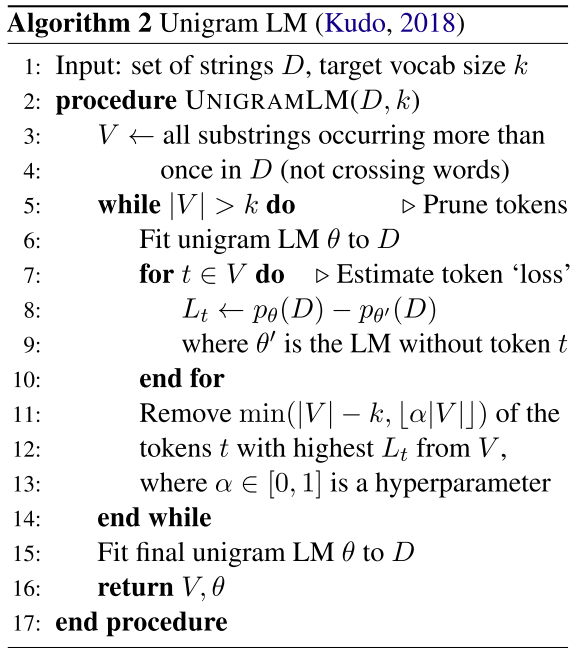 Since unigram is not based on merge rules (in contrast to BPE and WordPiece), there has several ways of tokenizing new text after training. Therefore, unigram also saves the probability of each token in the training corpus on top of saving the vocabulary so that the probability of each possible tokenization can be computed after training. It simply picks the most likely tokenization in practice, but also offers the possibility to sample a possible tokenization according to their possibilities.

Assume that the set of all possible tokenizations for a word $x_i$ is defined as $S(x_i)$, the overall loss is defined as:

SentencePiece[12][17] includes the space in the base vocabulary then use BPE or ungram algorithm to tokenize. XLNet, T5, ALBERT use SentencePiece for subword tokenization. It uses the unigram by default.

When --model_type=unigram (default) is used, we can perform sampling and n-best segmentation for data augmentation. See subword regularization paper[11] for more detail. nbest_size is the number of highest-ranked groups of tokens to sample from at each time, where -1 means all of the possibilities.

Sentencepiece provides the following general pre-defined normalization rules. We can change the normalizer with --normaliation_rule_name=<NAME> flag.

The TSV file is fed with --normalization_rule_tsv=<FILE> flag.

We can encode the text only using the tokens spececified with set_vocabulary method.

Sentencepieces does not extract pieces crossing multiple words (here the word means the space delimited tokens). The piece will never contain the whitespace marker (_) in the middle.

--split_by_whtespace=false disables this restriction and allows to extract pieces crossing multiple words. In CJK (Chinese/Japanese/Korean), this flag will not affect the final segmentation results so much as words are not tokenized with whitespaces in CJK.

Getting byte offsets of tokens

Sentencepiece keeps track of byte offset (span) of each token, which is useful for highlighting the token on top of unnormalized text.

We first need to install protobuf module and sentencepiece_pb2.py as the byte offsets and all other meta data for segementation are encoded in protocol buffer. encode_as_serialized_proto method resturns serialized SentencePieceText proto. You can get the deserialized object by calling ParseFromString method.

Unigram aligns better than char-based BPE does in morphology. [15] argued that Unigram LM tokenization can recover subword units that align with morphology much better than BPE do, using SentencePiece[12] implementation on English and Japanese Wikipedia.

It can be seen from the below figure that Unigram tends to produce longer subword units than BPE on average and have more tokens of moderate frequency.

As shown in the table, BPE tokenization tends to merge common tokens, such as English inflectional suffixes and Japanese particles, into their neighbors even though resulting units are not semantically meaningful. This may be due to the greedy construction of BPE tokenization.

[15] found that segmentations produced by Unigram LM align more closely to the morphological references in both English and Japanese. 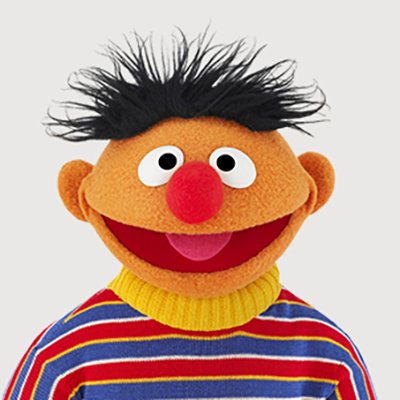