Machine reading comprehension aims to answer questions given a passage or document.

Frame-semantic parsing identifies predicates and their arguments, i.e. “who did what to whom”.

Teaching Machines to Read and Comprehend

In NMT, deep LSTMs have shown a remarkable ability to embed long sequences into a vector representation, which contains enough information to generate a full translation in another language.[2]

Deep LSTMs feed out documents one word at a time into a Deep LSTM encoder, after a delimiter, followed by a query ($d \oplus ||| \oplus q$, or $q \oplus ||| \oplus d$ ). The network predicts which token in the document answers the query.

Limitations of the Deep LSTM Reader:

When encoding the query $q$, the encoding $u$ of a query with length $|q|$ is the concatenation of the final forward and backward outputs:

When encoding the document $d$, each token at position $t$ is:

The representation $r$ of $d$ is a weighted sum of these output vectors. The weights can be interpreted as the degree to which the network attends to a particular token in the document $d$ when answering the query:

Finally, the joint document and query embedding is:

The Attentive Reader focuses on the passage of a context document that are most likely to inform the answer to the query.

Impatient Reader can reread from the document as each query token is read.[2] 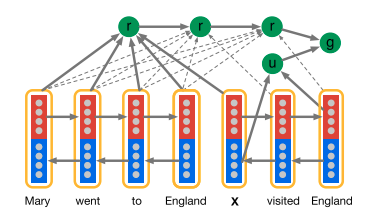 At each token $i$ of the query $q$, the model computes the document representation vector $r(i)$ with the bidirectional embedding :

The attention mechanism allows the model to recurrently accumulate information from the document as it sees each query token, ultimately outputting a final joint document query representation for the answer prediction 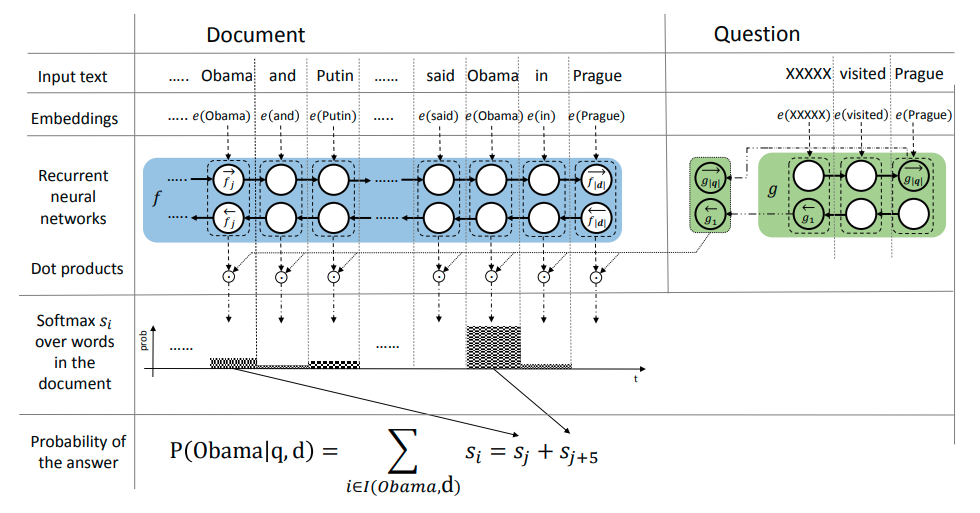 The parameters are learnt by maximizing the conditional probabilities of the training set: 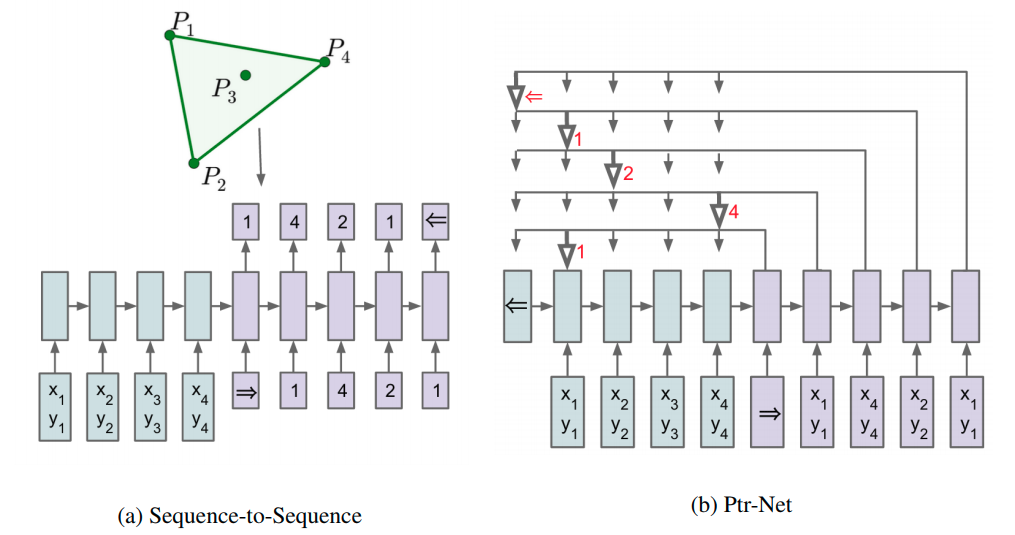 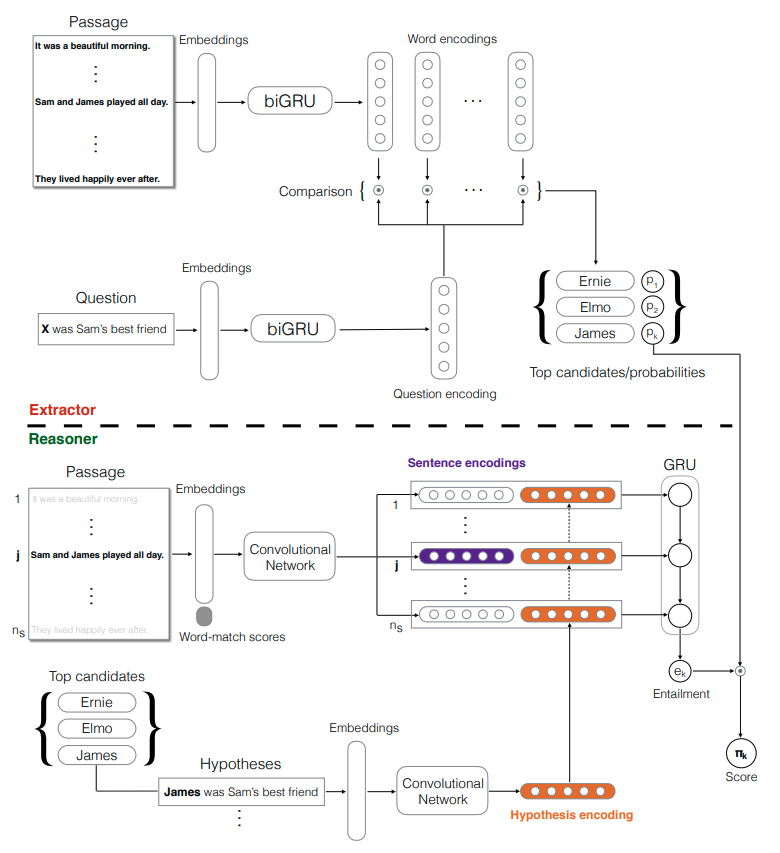 Finally, combine the output of the Reasoner and the Extractor at the same time when minimizing the loss function. (See the original paper[9] for details)

$H$ is usually a affine transformation followed by a non-linear activation function. 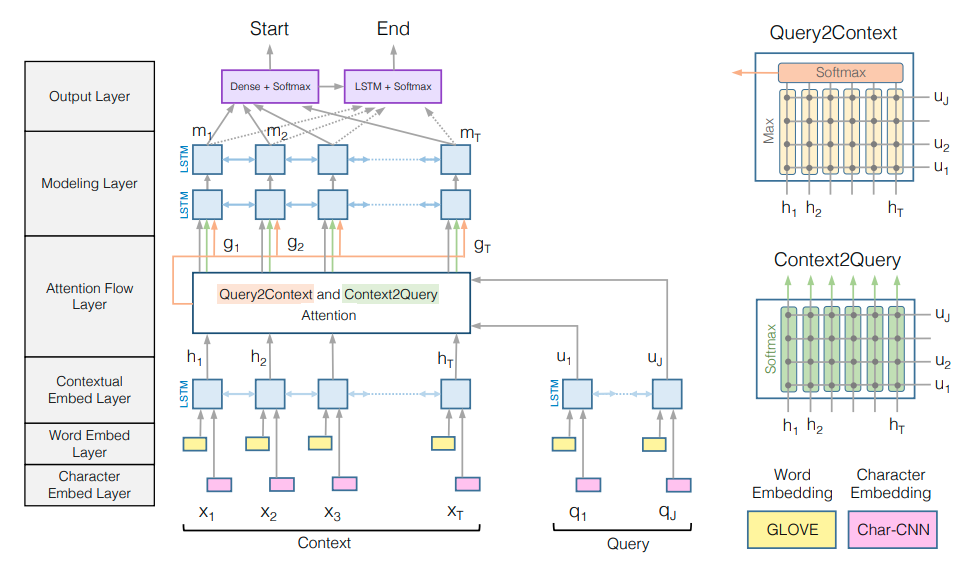 Let and represent the words in the input context paragraph and query. Use TextCNNs to encode the char-level inputs, followed by a max-pooling over the entire width to obtain a fixed-size vector for each word.

The first three layers are used to extract features form the query and context at different levels of granularity, akin to mlti-stage feature computation of CNNs in computer vision field.

Then use $\pmb{S}$ to obtain the attentions and the attended vectors in both directions.

where is the $t$-th column vector, $\beta$ is a trainable vector function that fuses three input vectors. In the experiments, 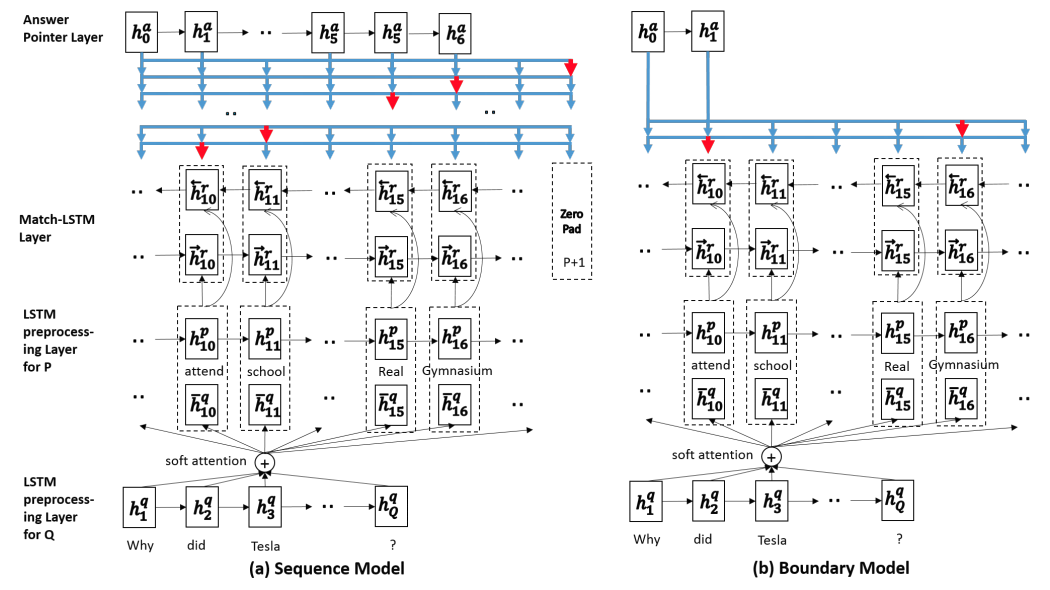 The vector is fed to a one-directional LSTM, so-called match-LSTM:

Then model the probability of generating the answer sequence as: 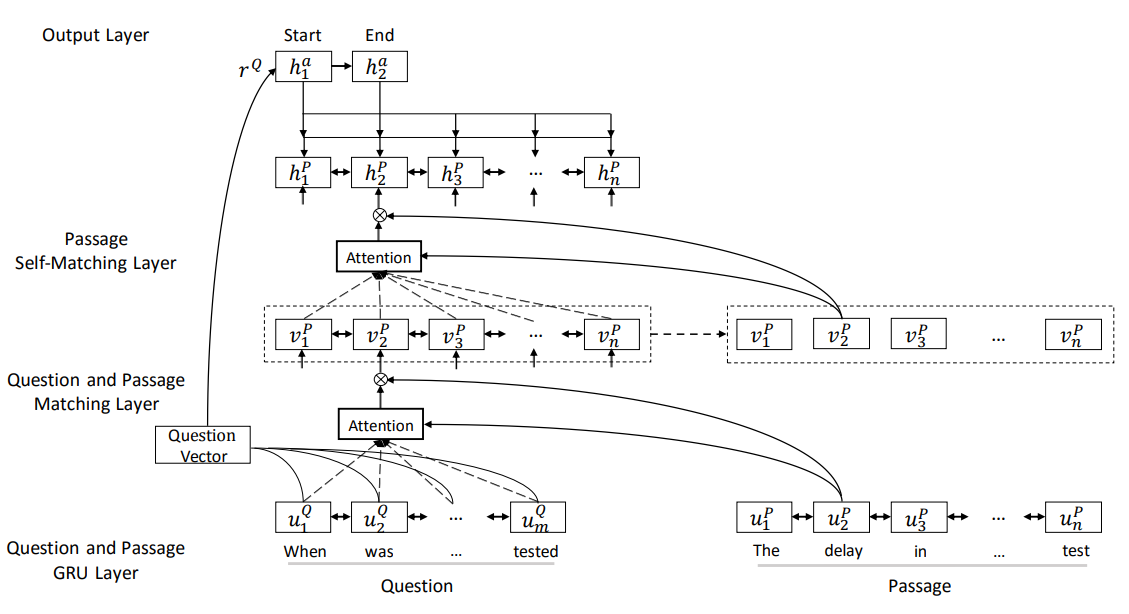 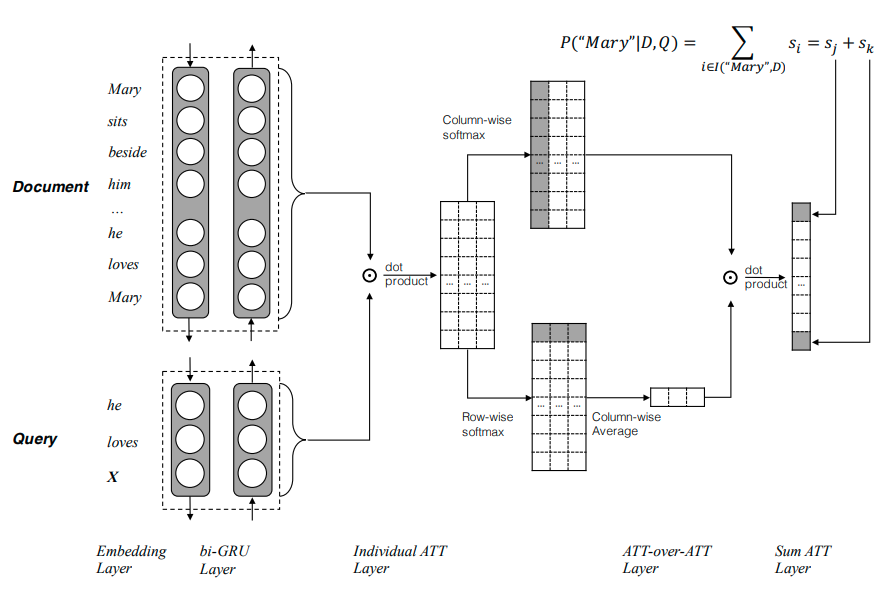 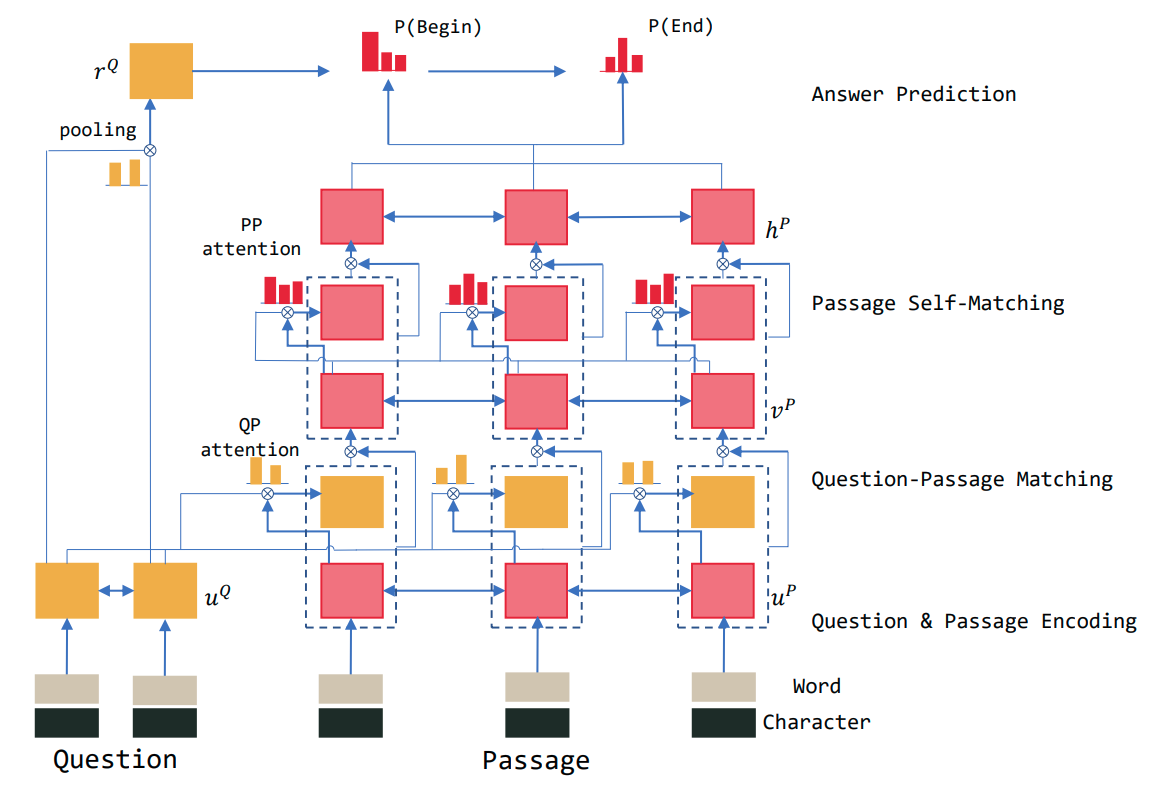 Consider a question and a passage .

Given question-aware passage representation . One problem is that, it has very limited knowledge of context,

Solution: match the question-aware passage representation against itself.

where is an attention-pooling vector of the whole passage $(v^P)$:

An additional gate as in gated attention-based RNNs is applied to to adaptively control the input of RNNs.

Given the passage representation

The input of the answer RNN is the attention-pooling vector: 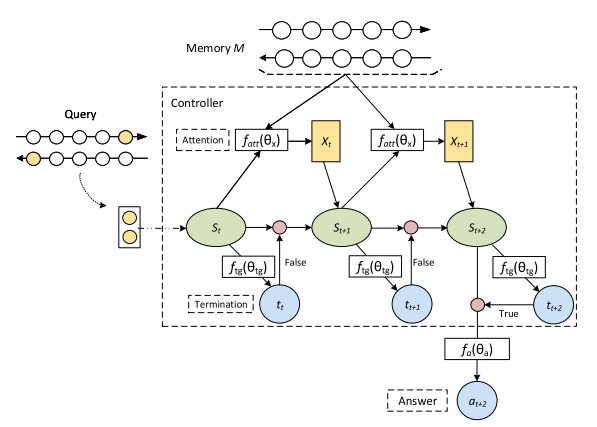 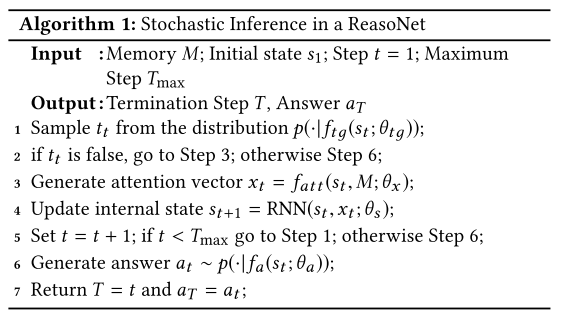 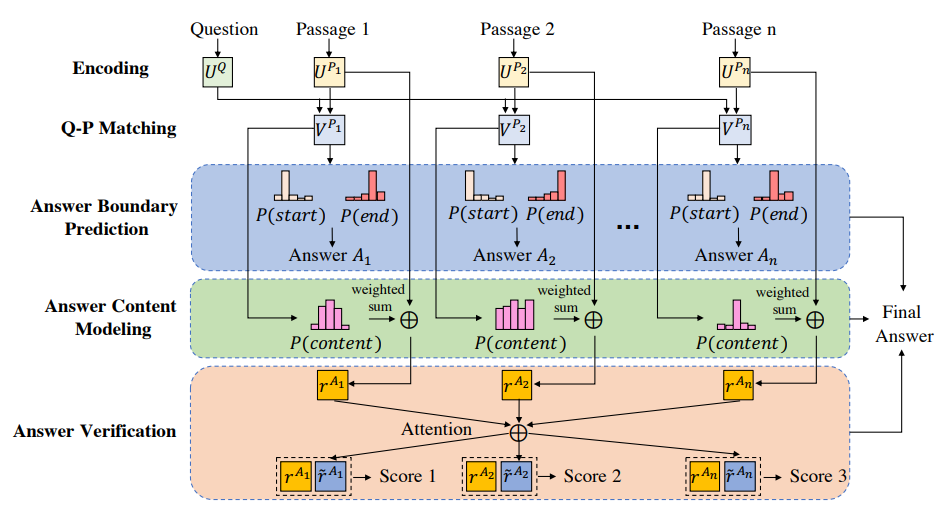 Here is the collected verification information from other passages with attention weights. Then we pass it together with the original to a FC layer:

Then normalize the score:

where is the index of the correct answer in all the answer candidates of the $i$-th instance.

Previous models relied on Recurrent neural nets, slowing down the training and inference speed. QANet[17] applied exclusively convolutions and self-attentions to speed up the training process. 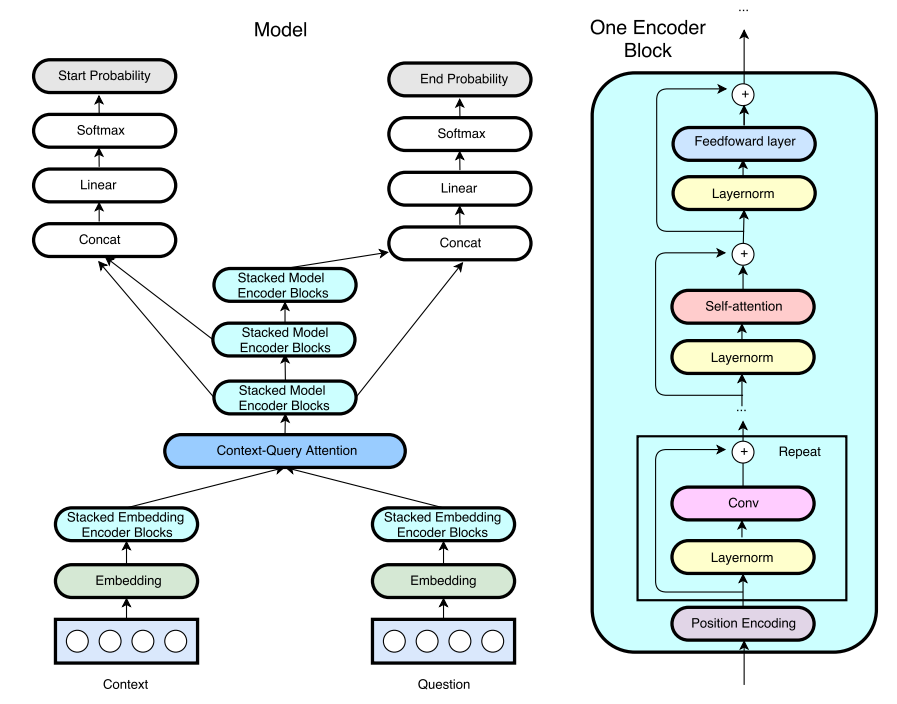 where $\overline{\overline{S}}$ is normalized matrix of $S$ along column with softmax function.