The brain has about 1014 synapses and we only live for about 109 seconds. So we have a lot more parameters than data. This motivates the idea that we must do a lot of unsupervised learning since the perceptual input (including proprioception) is the only place we can get 105 dimensions of constraint per second.
(Geoffrey Hinton)

Unsupervised learning can be used to capture rich patterns in raw data with deep networks in a label-free way.

Given a dataset , find $\theta$ by solving the optimization problem:

which is equivalent to minimizing KL divergence between the empirical data distribution and the model:

The AR property is that each output only dependes on the previous input units , but not on the future:

Like in LM, AR models cast the joint distribution of pixels in the images to a product of conditional distributions, turning the joint modeling problem into a sequential problem with factorization, where one learns to predict the next pixel given all preivous generated pixels.

where each pixel is conditioned on all the previous generated pixels, whose generation is in the raster scan order: row by row and pixel by pixel within each row.

Taking into account RGB color channels of each pixel, the distribution of pixel $x_i$ is:

PixelRNN employs the discrete distribution with a 256-way softmax. Each channel variable takes the scalar values from 0 to 255. The advantages:

Row LSTM is a unidirectional LSTM layer that takes the image row by row from top down to bottom computing features with 1-D convolution for a whole row at once.

It captures a roughly “triangular context” above the pixel with kernel size of $k \times 1$ in temporal convolutions where $k \leq 3$, of which the larger kernel size captures the broader contexts and weight sharing guarantees the translation invariance.

The computation proceeds as follows.

Diagonal BiLSTM is designed to impede the drawbacks of limited triangular receptive fields of Row LSTM and could capture the entire available context. 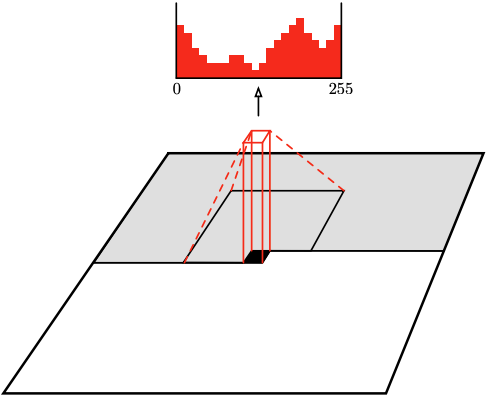 Masked Autoencoder Distribution Estimator (MADE) (Deepmind & Iain Murray)[3] masks the autoencoder’s parameters to respect autoregressive properties that each input only reconstructed from previous input in a given ordering.

MADE zeros out the connections of layer connections by elementwise-multiplying a binary mask matrix on the weight matrices, setting the weight connectivities as 0s for removing.

For $l$-th layer in masked autoencoders, the mask of weight matrices $\mathbf{W}$:

For the output mask of weight matrices $\mathbf{V}$: 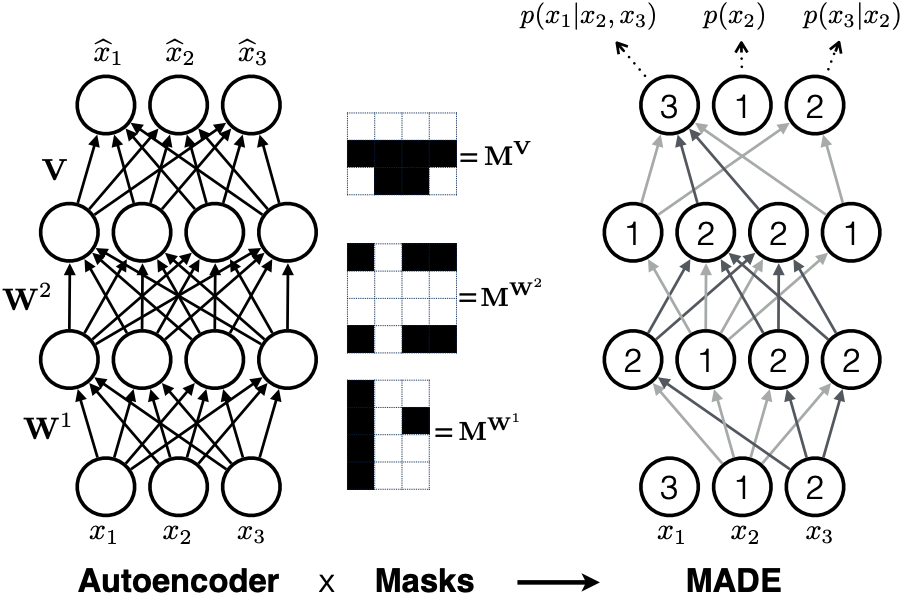 Gated PixelCNN takes into account both the vertical stack and the horizontal stack by combing both the pixels of region above and those on the left of the current row, wherein the convolutions of vertical stack are not masked. (See [5] for the tutorial.)

Gated PixelCNNs replace the ReLU between masked convolutions in the original pixelCNN with the gated activation function:

where $p$ represents the # of feature maps, $\circledast$ denotes convolution operations, where it is masked in horizontal stack but unmasked in the vertical stack. 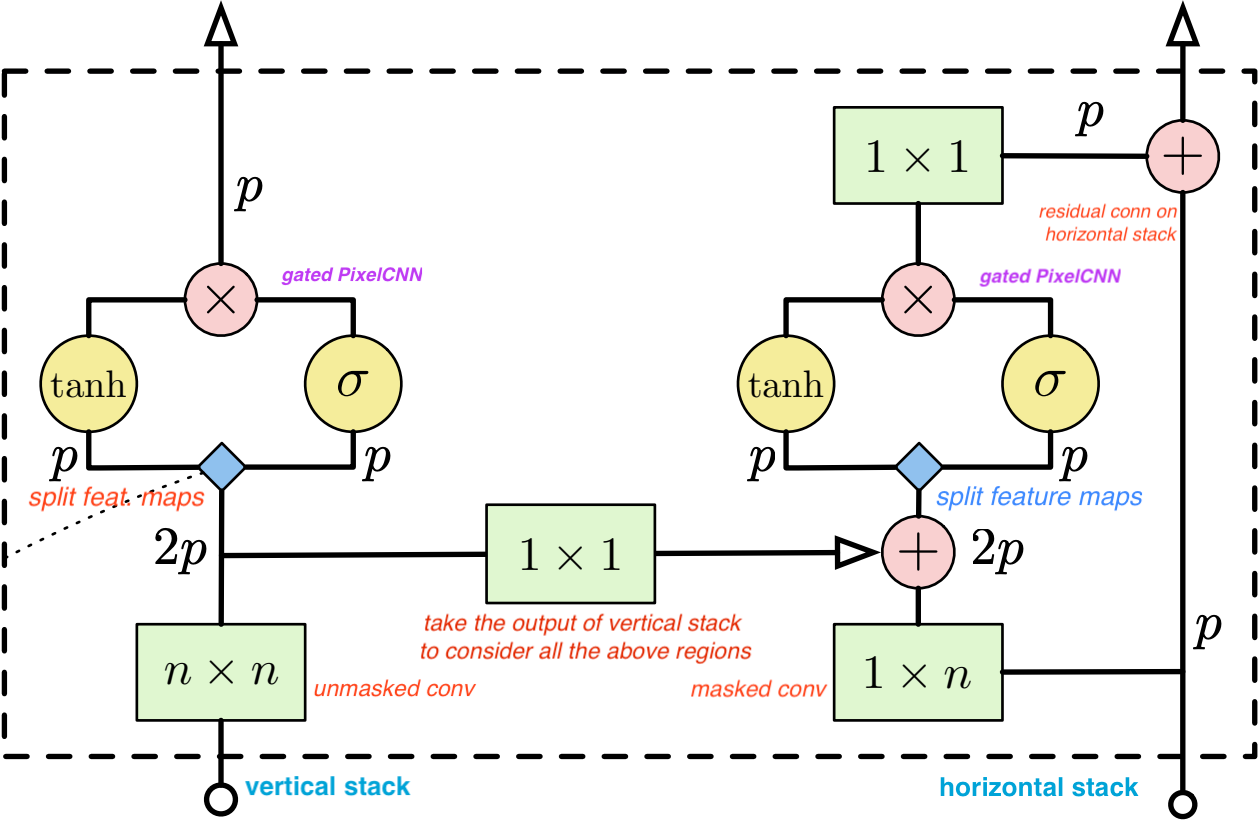 where $k$ is the layer number.
Condition on what:

where $\alpha$, $\gamma$, $\beta$ are scalar coefficents depdenting on the mixture component and previous pixels.

The overall model structure is:

Like the conditional Gated PixelCNN, WaveNet can be also conditional on a hidden representation $\mathbf{h}$.

The raw audio output is stored as a sequence of 16-bit scalar values (one per time step), thus the softmax output is 216=65,536 probabilities per timestep. WaveNet applies a $\mu$-law companding transformation to the data and thenquantize it to 256 possible values:

where , $u=255$. The reconstruction signal after quantization sounded similar to the original.

Problems: During generation, convolutional AR models redundantly compute states, impeding the speed of generation process. Such states can be cached and reused to expedite the generation.[14]

The convolutional autoregressive generative model could cache and reuse the previously computed hidden states to accelerate the generation.

The below figure shows the model with 2 convolutional and 2 transposed convolutional layers with strid of 2, wherein blue dots indicate the cached states and orange bots are computed in the current step. The computation process can be seen as: 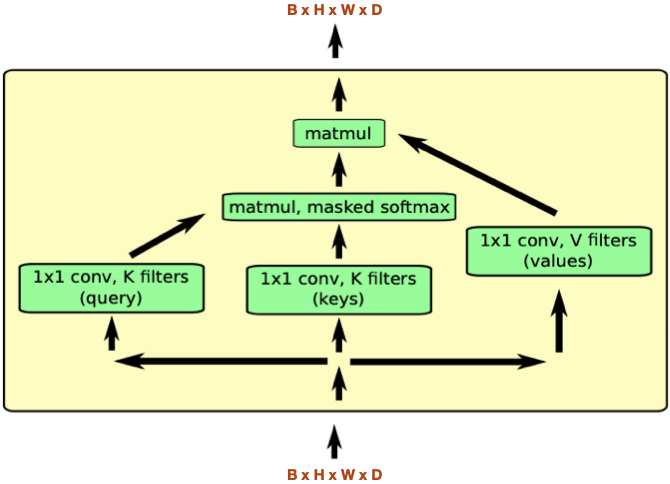 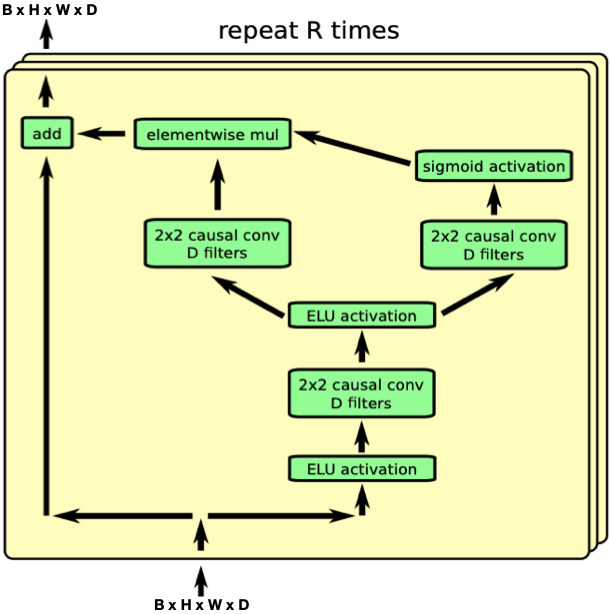 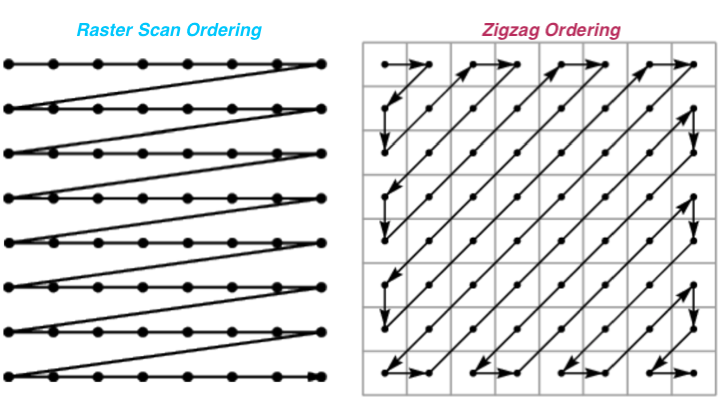 “The basic difference between AR models with Generative Adversarial Networks (GANs) is that GANs implicitly learn data distribution whereas AR models learn the explicit distribution governed by a prior. “[15]